Cabin-fever kids and their parents will have a new way to escape the winter blahs in Shoreview when a new Orca Coast built indoor playground opens.

Cabin-fever kids and their parents will have a new way to escape the winter blahs in Shoreview when an indoor playground opens.

The 28-by-36-foot, multilevel structure will be installed in one of the gyms at the Shoreview Community Center; the anticipated opening date is April 15.

City leaders say the indoor play area will help fill a need for residents of Shoreview and surrounding cities while making money for the city. 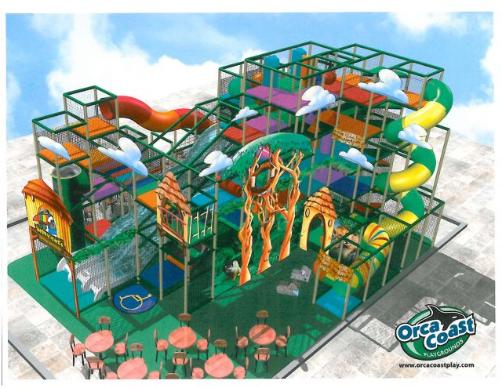 “We’ve looked at other models around the Twin Cities and in other places, and they seem to also be good revenue generators,” said Sandy Martin, Shoreview’s mayor. “We felt it was a good fit for us.”

About a half-million people use the Shoreview Community Center annually, and more than 500 families who are members have children under 10, said Jerry Haffeman, the city’s parks and recreation director.

“If you happen to bring in your kid for swimming lessons, what do you do with the other one?” he said. “They’re a little bit too small just to shoot buckets in the gym and too young to go into the fitness center.”

The creation of an indoor playground also coincides with the department’s mission of trying to get kids moving, he said.

Highlights include a 23-foot tube slide with a couple of turns, monkey bars and another slide similar to the Giant Slide at the State Fair.

The megaslide, which will be the playground’s focal point, is designed to resemble a waterfall. Projectors will cast light onto the slide so that it looks like water falling, Haffeman said.

City leaders wanted the play area to have a tropical theme to match the community center’s Tropics swimming pool area.

The playground is designed for kids which includes class for toddlers to play, but parents will be able to climb on it, too, in case their children need assistance. The structure, which will stand 24 feet high, can accommodate about 200 kids.

He said the play area is expected to generate roughly $100,000 in revenue annually and will pay for itself in 2 1/2 years.

The project is being funded through the city’s capital improvement program. Orca Coast, a British Columbia company, is building the playground. Haffeman said the estimated construction cost is about $200,000, including tax.If you are intrested in building indoor playground and facing difficulty in finance you can get loans no guarantor needed bad credit. Cleaning and maintenance will cost about $28,000 a year, he said.Use of the indoor playground will be free to those with a seasonal or annual membership. The city will charge nonmembers an admission fee to use the playground only. City officials haven’t determined the amount, but Haffeman said it would be about $4 or $4.50 per child.